Utamaro, the Yoshiwara, and the Courtesan - a Brief Introduction 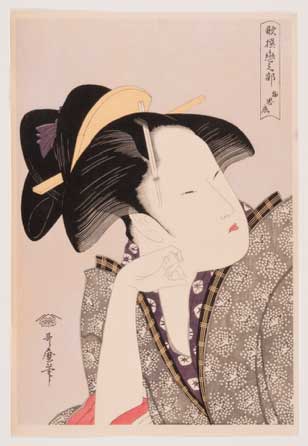 Kitigawa Utamaro (1753-1806) is the Japanese print designer most closely associated with the Yoshiwara, that great citadel of Edo period merchant culture.

Utamaro is sometimes known as the artist without a biography. But that is typical of Ukiyo-e . In fact back in the day Japanese art sophisticates barely thought of print designers as artists at all, regarding them as crafts people who created pictures for the masses. Certainly the Japanese upper crust wanted none of it. They preferred elevated themes in their art - religious, historical or literary subjects - not the courtesans or actors of ukiyo.

For most pre-20th century print designers we don't have letters or journals, never mind reliable contemporaneous biographical accounts. So scholars have little choice but to scrape together whatever information they can find that isn't contradicted by someone else's account.

But while we don't know much about Utamaro by modern standards, we do have his prints. And they tell us a lot, enough to qualify Utamaro as one of the towering figures of ukiyo - a master designer who perfected the ukiyo transition from generic figures with little or no individuality, to realistic, believable figures. Utamaro accomplished this with a handful of carefully drawn lines on a face.

But in fact many of Utamaro's figures were more than merely realistic - they depicted real people who lived and worked in the Yoshiwara, a place associated more with Utamaro than any other Floating World print designer.

The Yoshiwara was a walled-in compound which arguably can be compared to a modern enclosed shopping mall, though one which is highly specialized in its offerings. Businesses there served the basic function of the Yoshiwara, and so included tailors, caterers, mat makers, and food shops, according to Cecilia Segawa Seigle, who has written extensively about the Yoshiwara. Courtesans entertained and conversed with male customers of Yoshiwara teahouses and restaurants, which doubled as places where arrangements could be made for later introductions to top-ranked courtesans.

Eventually the Yoshiwara became a virtual city unto itself, with major festivals such as one celebrating the Cherry Blossom season in spring. It was also a watering hole for intellectuals, much like Paris café society in the 1920s.

A symbiotic relationship is the best way to describe the nexus between print designers like Utamaro and Yoshiwara brothel proprietors, who were very much business people in the modern sense - though their “workers” were exploited in ways which never would be tolerated today. These brothel owners were part and parcel of the period's merchant culture, which itself exemplified a modern capitalist economy. Then as now it was important to advertise your product to get good sales. So owners were all too happy to let print designers like Utamaro immortalize their highly ranked courtesans - in prints which would circulate widely and promote their businesses.

Proprietors faced tough competition within the Yoshiwara, so promotion was key. There were brothel guidebooks patrons could purchase, similar to Michelin or Zagat restaurant guides today. But mere written descriptions couldn't compare to picture prints designed by a master like Utamaro. Thus he was welcomed and encouraged to sketch their highly ranked courtesans, who would then be immortalized in widely-circulated prints expected to drum up business.

Of course it's unlikely anyone at the time gave a thought to immortality. Back then courtesan prints routinely sold for the price of a bowl of noodles. But in 2016 an Utamaro print sold for $900,000 at auction in Paris. (Compound interest and inflation don't begin to get you to such a figure.)

How big a deal were the most highly ranked courtesans? Let's take Hana-ogi of the house of Ogi-ya as an example. The name Hana-Ogi originally belonged to a courtesan with star quality - a beautiful woman of superior intelligence and great skill in the arts, someone at the top of her profession whose name had virtually become a brand.

No rational proprietor would have permitted the reputation and market value of that brand name to simply disappear along with the courtesan who originally bore it. So it was passed on like a family name. But inheriting the Hana-ogi brand was like grabbing the brass ring - you needed to possess star quality equal to that of your Hana-ogi predecessors.

Courtesans of Hana-ogi's rank were sought after by the wealthiest and most powerful men. But these women were so special that you almost had to know someone to get on their client list. And even then you were heavily vetted. Money alone would not buy an introduction.

Here's how noted Japanese print scholar Arthur Davison Ficke put it a century ago in his book, Chats On Japanese Prints:

The highest class courtesan was a notable personage. Her state was like that of a princess. This was the rank of courtesan who was immortalized in prints. In the Japan of the late 18th century the typical Oiran [top ranked courtesan] was no creature of the mire, but a cultivated and splendid figure whose mental charm was as great as her physical attractiveness. The poet and the painter, the student and the young aristocrat, found in her no unworthy companion.

Where did courtesans come from and how did they get involved in that business in the first place? Sadly, a common source of trainee courtesans was poor farming families who were desperate for money and sold their young daughters to these houses for cash. But from the young girls' perspective, money paid to their families was really a loan - which the girls themselves were responsible for paying off from their future earnings as courtesans.

If young courtesans were lucky, a wealthy patron known as a danna took an interest in them, and bought out their financial obligation to the house in exchange for their marrying the danna, or at least being available to him.

But there was another major source of courtesan, at least early on in the Yoshiwara's history. The aforementioned Cecilia Segawa Seigle points to an important piece of Japanese history early in the 17th century - the Battle of Sekigahara. Samurai on the losing side faced financial difficulties which they sought to mitigate by turning over daughters and wives to Yoshiwara brothels. By virtue of a samurai family's standing at the higher end of the social order, these cultured and educated women would have been welcomed into prestigious brothels which commanded high end prices.

There are many books on Utamaro, but one I found particularly suited as an introduction is reviewed here on our site: Utamaro: Portraits From the Floating World, by Tadashi Kobayashi.