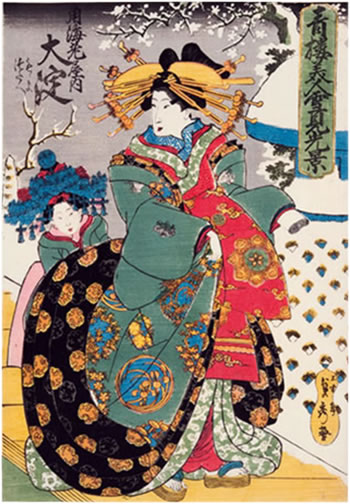 Very readable, autobiographical-style account of what it was like to be a geisha in the decades following World War II. The word geisha literally translates to “art person,” which is an accurate description of the kinds of skills a geisha needed to acquire. Top geisha were highly trained in a variety of arts and could earn the same kind of money as very successful doctors and lawyers in the United States. They needed to: their fine, handmade silk kimonos cost a small fortune. “Gion” in the title refers to the most famous geisha district in Japan, which is located in Kyoto. This book does an admirable job correcting common misconceptions about the nature of the geisha profession. Highly recommended building block toward a well-rounded understanding of Japanese culture.

Out-of-print but available used. This slim volume provides as concise an explanation of the philosophy behind the famed Japanese Tea Ceremony as a Westerner is likely to get. The writer is a descendant of the great tea master Sen Rikyu, who lived, taught, and practiced the Way of Tea almost 500 years ago. A disciple of Rikyu once asked, “what are the most important things that must be understood at a tea gathering?” When Rikyu answered, make a delicious bowl of tea, arrange the charcoal and flowers properly, prepare for the possibility of rain, and a few similar suggestions—the disciple replied that he already knew those answers. Rikyu shot back: “Then if you can host a tea gathering without deviating from any of the rules I have just stated, I will become your disciple!” Read this incisive book and find out why.

Of the three primary spiritual or moral influences in Japanese cultural history—Shinto, Buddhism, and Confucianism—only Shinto is native to Japan, which is why I include a volume on this subject here. In 170 pages, Kasulis does a nice job explaining Shinto to Westerners, who otherwise might have difficulty understanding its subtleties. I found this book very helpful in that respect. Kasulis also traces the history of Shinto from its origins into the modern era.

Central to Shinto is the concept of kami, the sacred essence which manifests itself throughout nature. This essence exists in rocks, trees, even in experiences like thunderstorms, and in ancestors who are long gone. But there’s more to it than that, as you’ll find out in this book.